If you’ve noticed there are fewer cool young things wandering around Leeds city centre lately, it’s because they’re all over at Water Lane Boathouse. And sourdough pizza, summertime weather, and a laundry list of indie beers suggest they’re going to be there for a while yet.

It’s the latest project to inhabit the old grain warehouse at Canal Wharf’s Lock Number One, which has been reinvented time and time again. Originally built to be a shipment hub in the 1800s, it has served as the skeleton for several chic restaurants that have tried and failed to win over Granary Wharf’s flock of young professionals.

But it seems it might finally be ready to relax its old bones and accept the Boathouse as a worthy resident.

All about that atmosphere 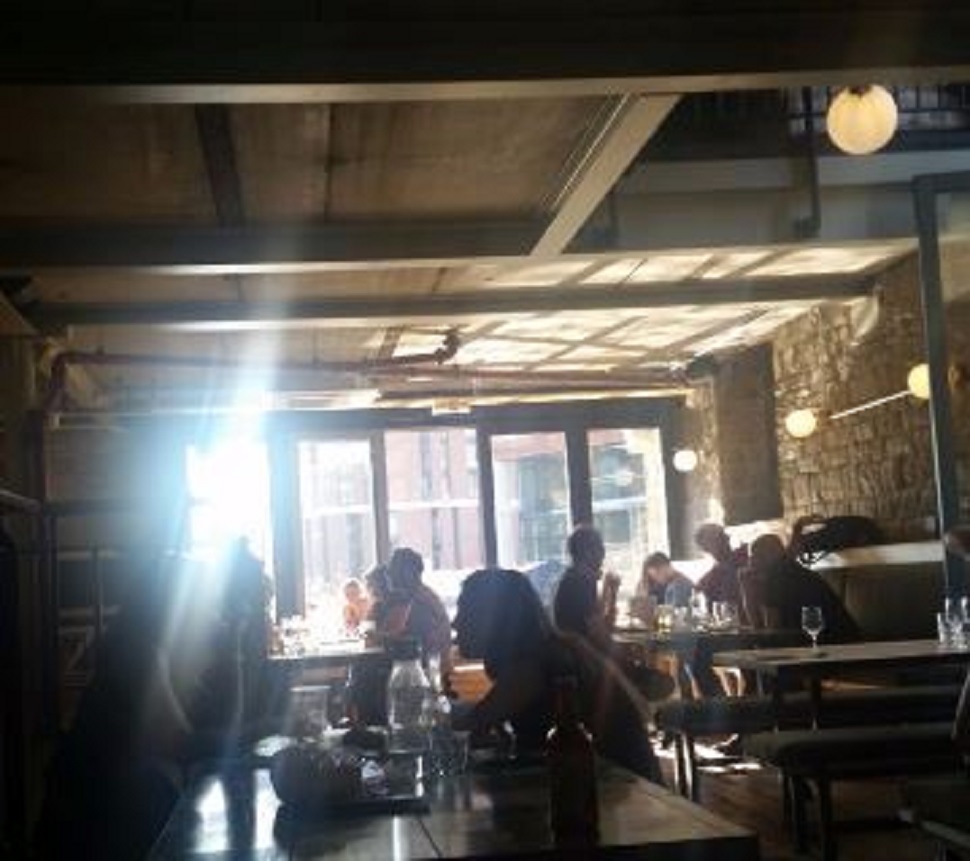 Disclaimer: I stopped by on the hottest day of the year when the summertime vibes were in full swing and the beer garden was a sea of Ray Bans and pint glasses. But, toss a few fairy lights over the exposed beams and something tells me this place will still thrive in the dead of winter.

Walking inside was like stepping into an Instagram filter: the evening sun streamed lazily through the (many) windows and I could see canal boats passing by. Everything from the water glasses to the empty kegs looked trendy, which would have been annoying if the vibe wasn’t decidedly laidback.

Yorkshire stone, picnic-style benches, and industrial wooden flooring pay homage to the building’s Northern soul, while minimalist, Scandi detailing brings it right into the moment. On a Thursday evening the bar was already eight rows deep with what looked like Belgrave’s locals’ older siblings – less ‘student’ and more ‘millennial’ – but it didn’t feel hectic.

In all honesty, I was won over as soon as I saw a terrier flaked out underneath one of the benches – anywhere that welcomes dogs is good in my books.

Homage to grains: The food 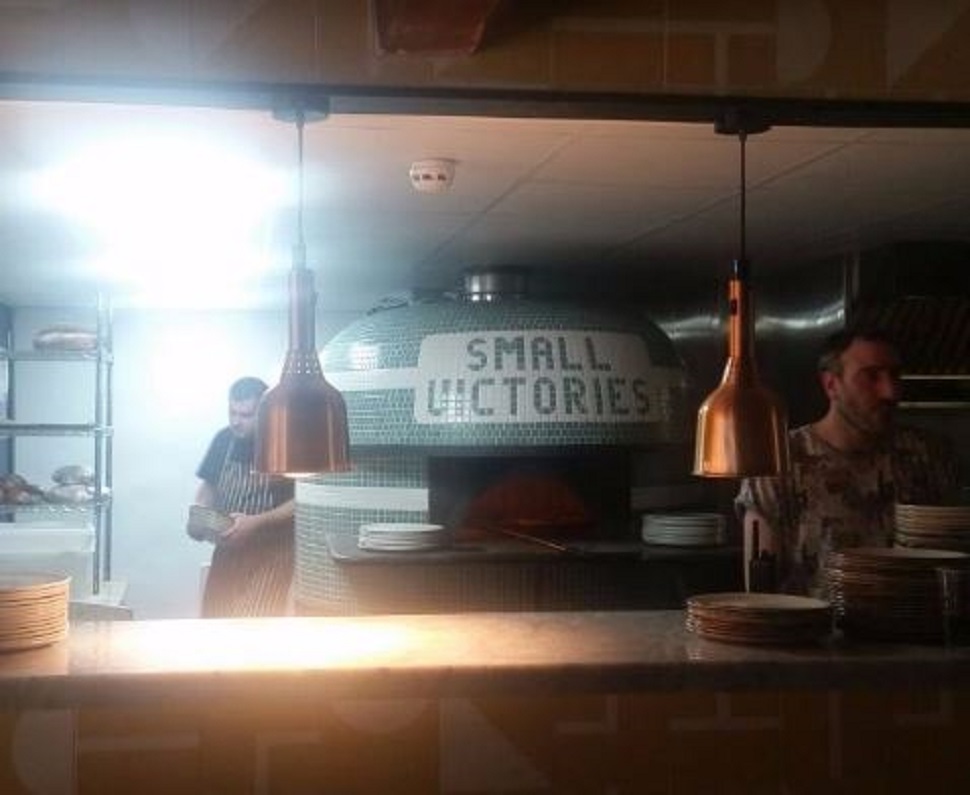 The building historically stored threshed grain, and bread is making a serious comeback thanks to the folks in charge of the menu. Small Victories have brought their sourdough skills to the Boathouse’s kitchen, where they make authentically fabulous pizzas in a hand-crafted oven shipped all the way over from Napoli.

They do hot and cold sandwiches, too, and a whole host of creative salad bowls. You can snag a main and a beer for less than £15, with change. Spoilt for choice, we were lucky enough to be treated to a selection from across the menu. 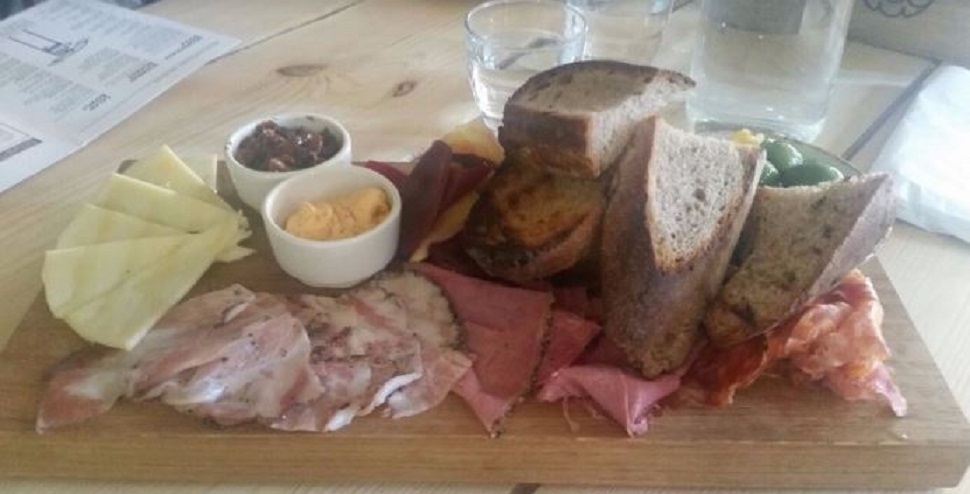 The meat sharing board exceeded expectations from the get-go, featuring a selection of cheeses and dips to please all sorts of palates. As a carb-ivore, I couldn’t get enough of the homemade bread, especially when it was dressed in a cheesy slice of pecorino and honey, which gave a sweet finish to the rustic crust. 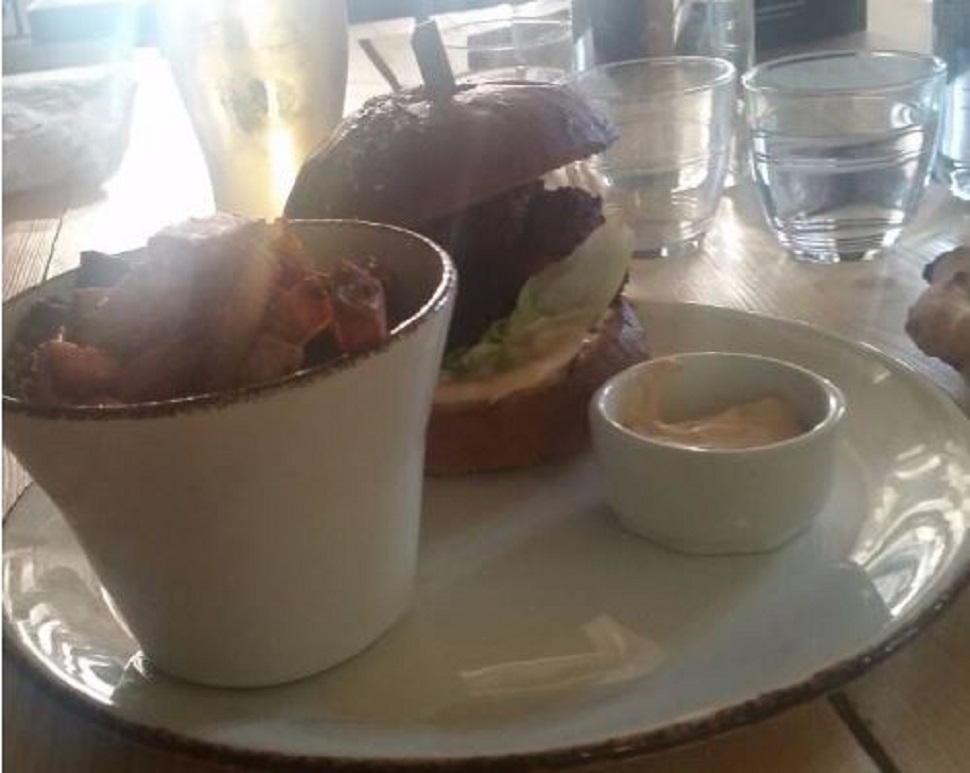 For those who like to venture to the vegetarian side of the menu, I can confirm that the beetroot, white bean, and fennel burger was a worthwhile journey. While some veggie burgers turn out to be disappointing imposters, the Boathouse’s offering packed a wholesome, burger-like bite and tasted every bit like comfort food. My only qualm was that I had to shove it back into the bun with my bare hands, sloppy Joe style.

If you’re struggling to pick a side, definitely go for the skin-on chips. I don’t know why they were so good, but they were, especially when doused in a generous glob of burger sauce. 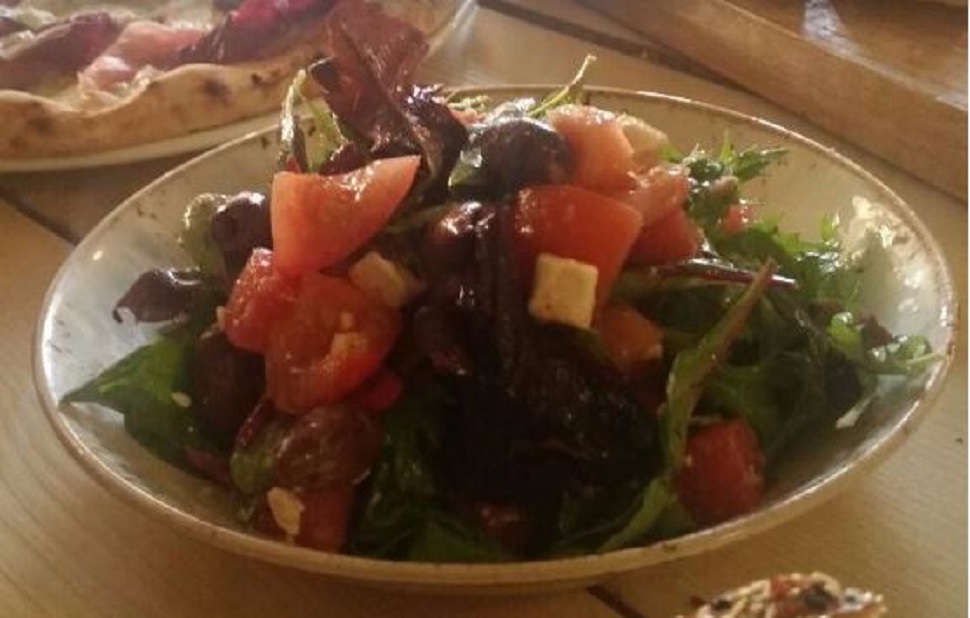 You and I don’t have a lot in common if you’re inclined to choose from the salad section of the menu. But I’ll put our differences aside to let you know you probably won’t be disappointed with the watermelon and feta option. Everything was rainbow fresh and rich in flavour. Fruity explosion of the watermelon gave way to creamy feta, rounded off by feel-good leafy greens in a refreshing (and surprisingly filling) dish. 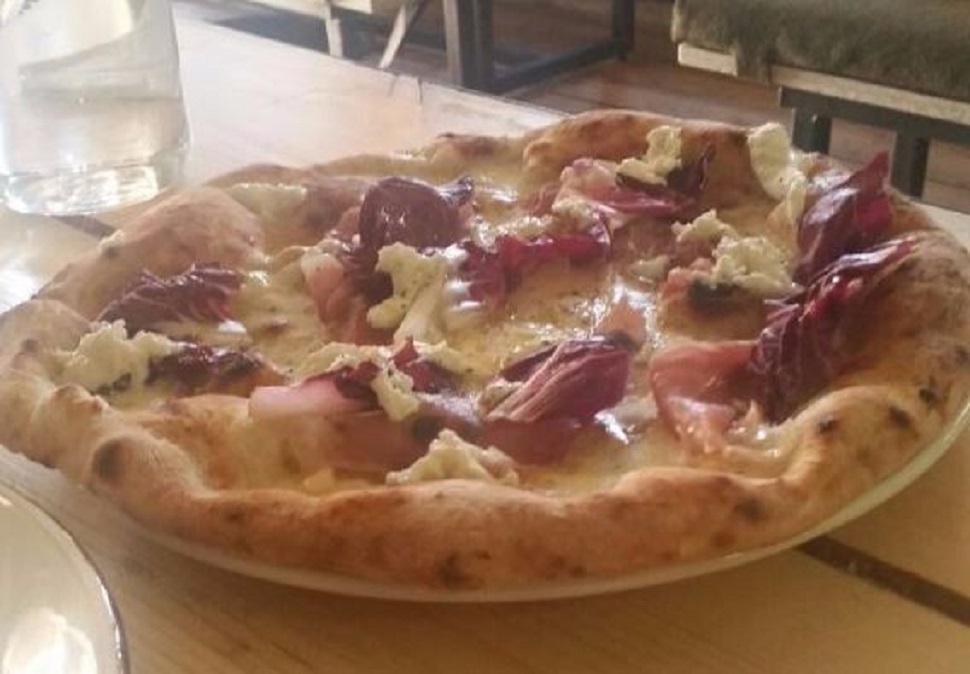 There are a few buzzwords that catch my attention when I’m scoping out a menu, and sourdough is one of them. Small Victories keep their recipe stripped back, using just Organic Yorkshire flour, water, salt, and a little time to create their signature sourdough pizza bases. The result is dangerously delightful: doughy, rustic, and incredibly light, it’s the kind of slice you can fold over New York style, without the post-pizza rush of stodgy guilt.

A word about beverages: The drinks 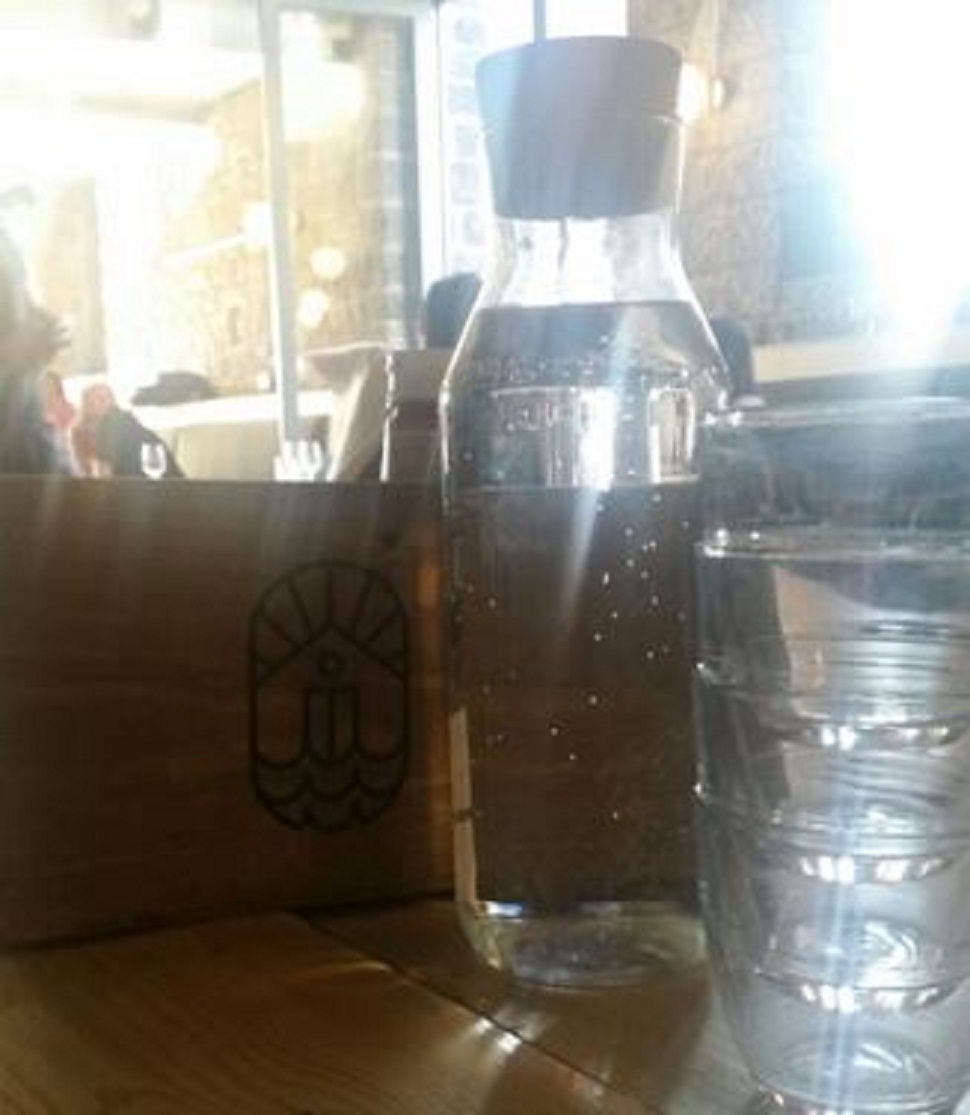 As a nervous Canadian driver on backwards British roads, I sadly didn’t get the chance to truly appreciate the drinks menu. However, it rivals the food in both length and versatility.

As you’d probably expect from the brains behind Headrow House, there’s a dictionary-full of craft beers to choose from, along with an impressive wine list. But it’s the gin that steals the show, with ten options including Porobello Road and Monkey 47. 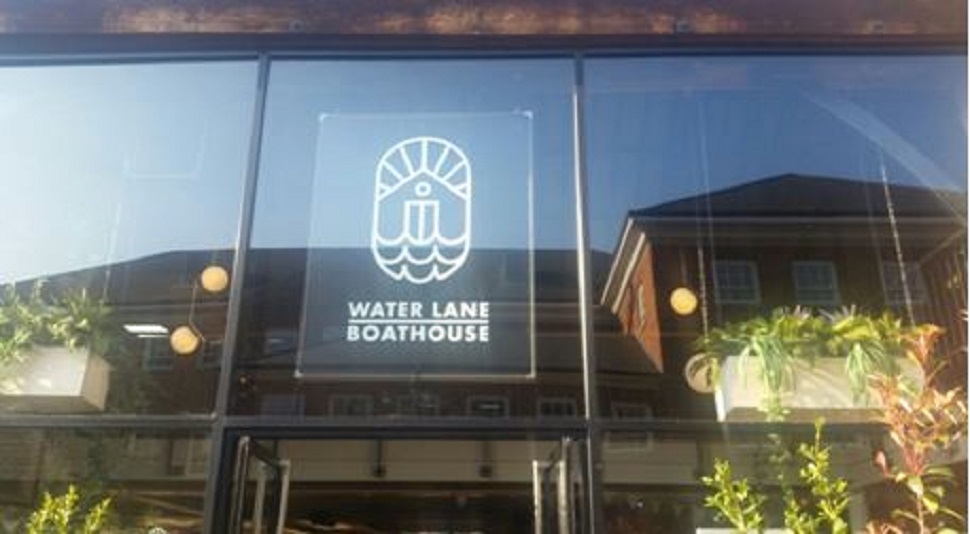 Budget-friendly food, an intoxicating variety of beverages, and an easygoing atmosphere already make this place one of Leeds’ hottest hangouts.

As we settle into the great British summertime, it could just be that this is exactly what the old warehouse on Granary Wharf needed. The food matches the quality of other establishments in the area, but it offers a refreshing alternative in that it’s the kind of affordable, comfortable place you pop into on a whim and end up staying for hours. Water Lane Boathouse isn’t trying to be cool – it already knows it is.