Drink, dine and game at Victoria Gate Casino. With a brand new menu, and even more cocktails, how does Curve's culinary offering stack up?

Food as a second business can be hit and miss. It’s nice in that you can offer a second service and keep your customers in the store for longer, but if food isn’t what a business can naturally offer it can feel forced, awkward and be below par. Fortunately, this isn’t the case at Curve — Victoria Gate Casino’s in house restaurant. 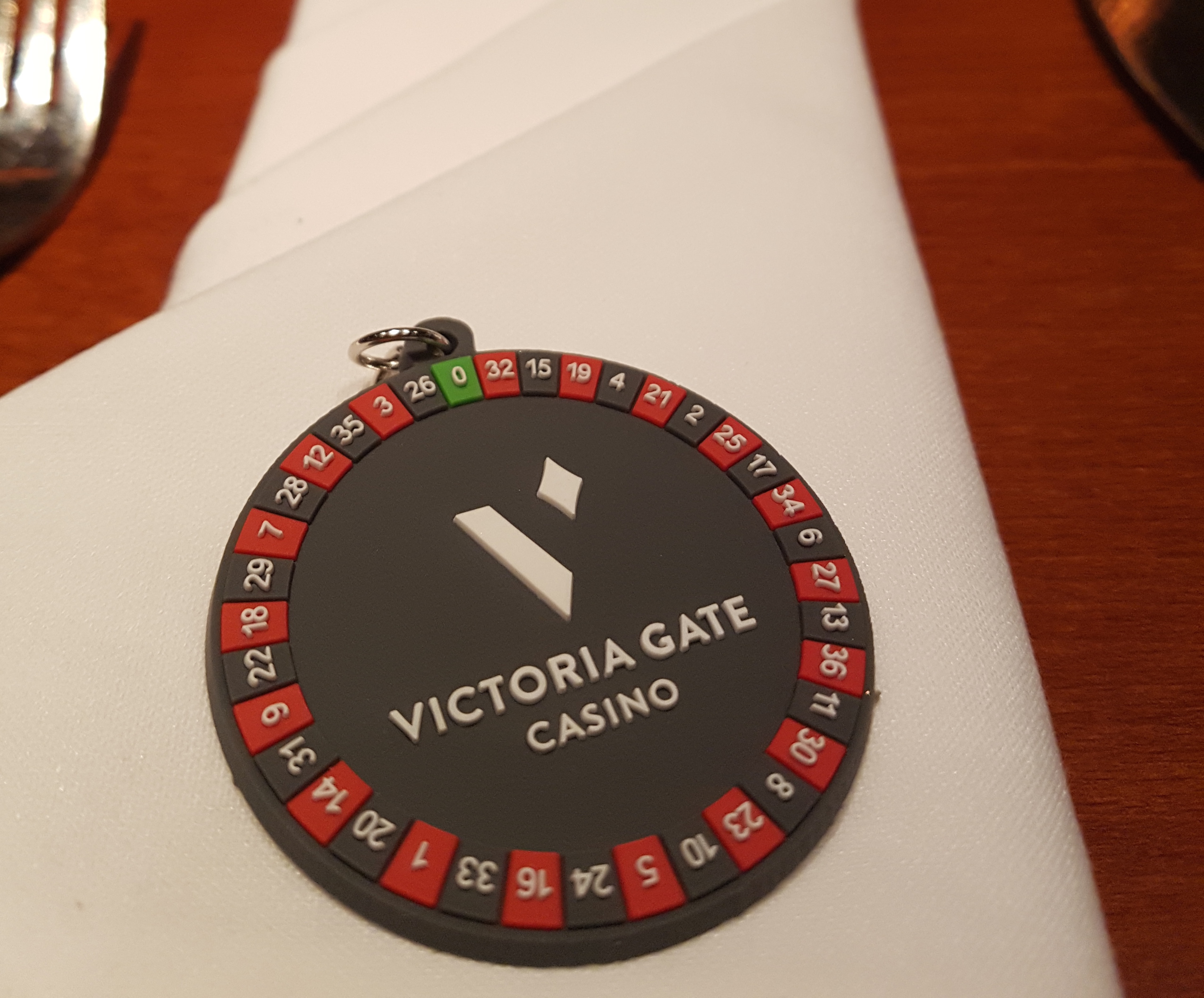 If you’re worried about being surrounded by the whir of roulette tables and the clatter of slot machines, you can relax. Curve sits serenely in its own section of the building, overlooking and yet away from the madness below. 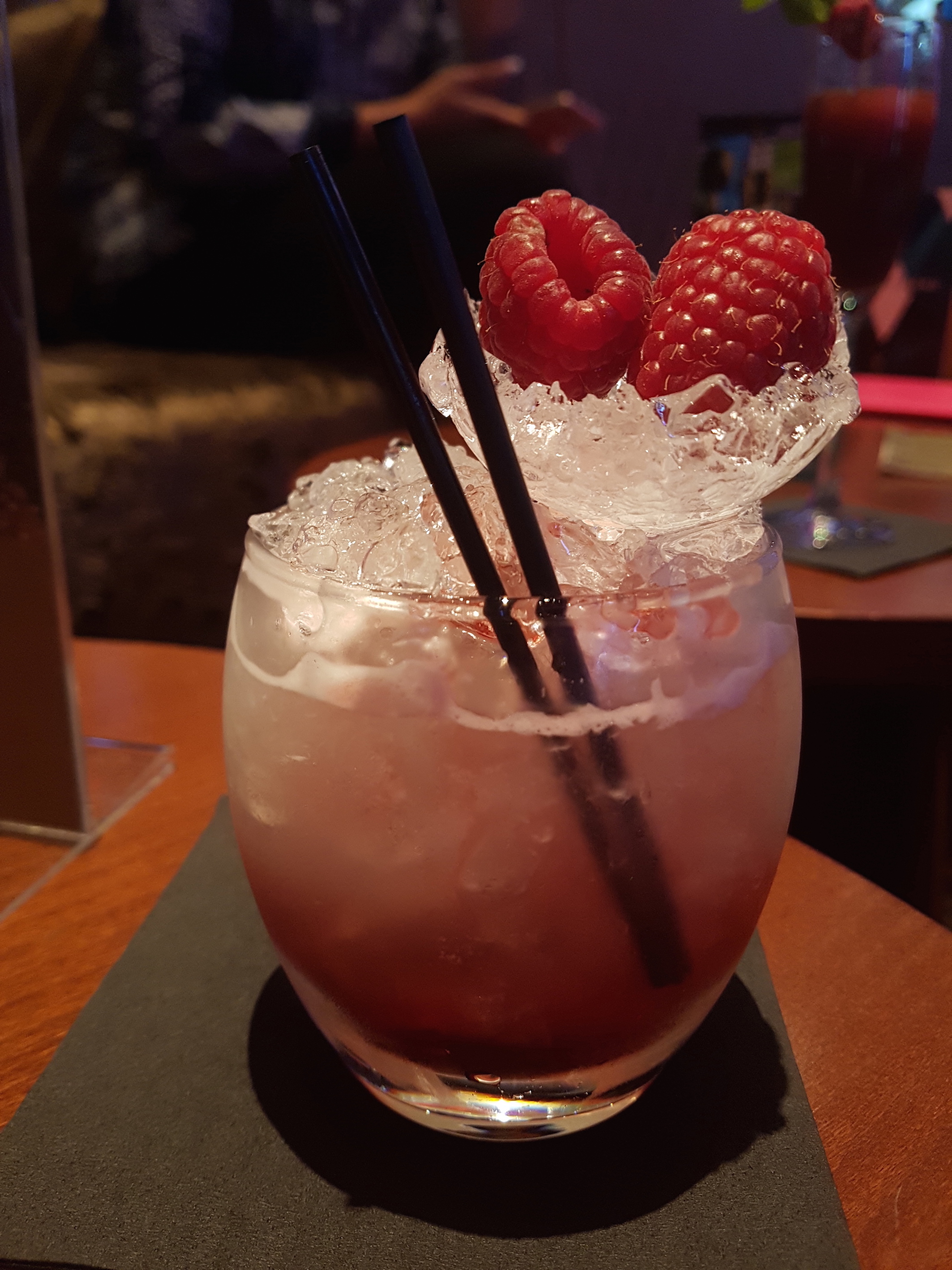 We started with cocktails, which were simple, but nice. A bramble that isn’t too sweet is a wonderful thing, and we’re glad to say they delivered on this promise. From there, we were led to our table, and the food fest began.

The Dine and Play menu is varied enough to keep everyone happy. If you feel like a classic ham hock terrine, you’re sorted. The dim sum? Sadly, we can’t report back to you on that, but as for the smoked salmon? It was surprisingly good! It was fresh and beautifully presented, it was served cold, but not painfully so, and the side salad was simple, but just flavoursome enough to break up the intense fatty richness of the smoked salmon. 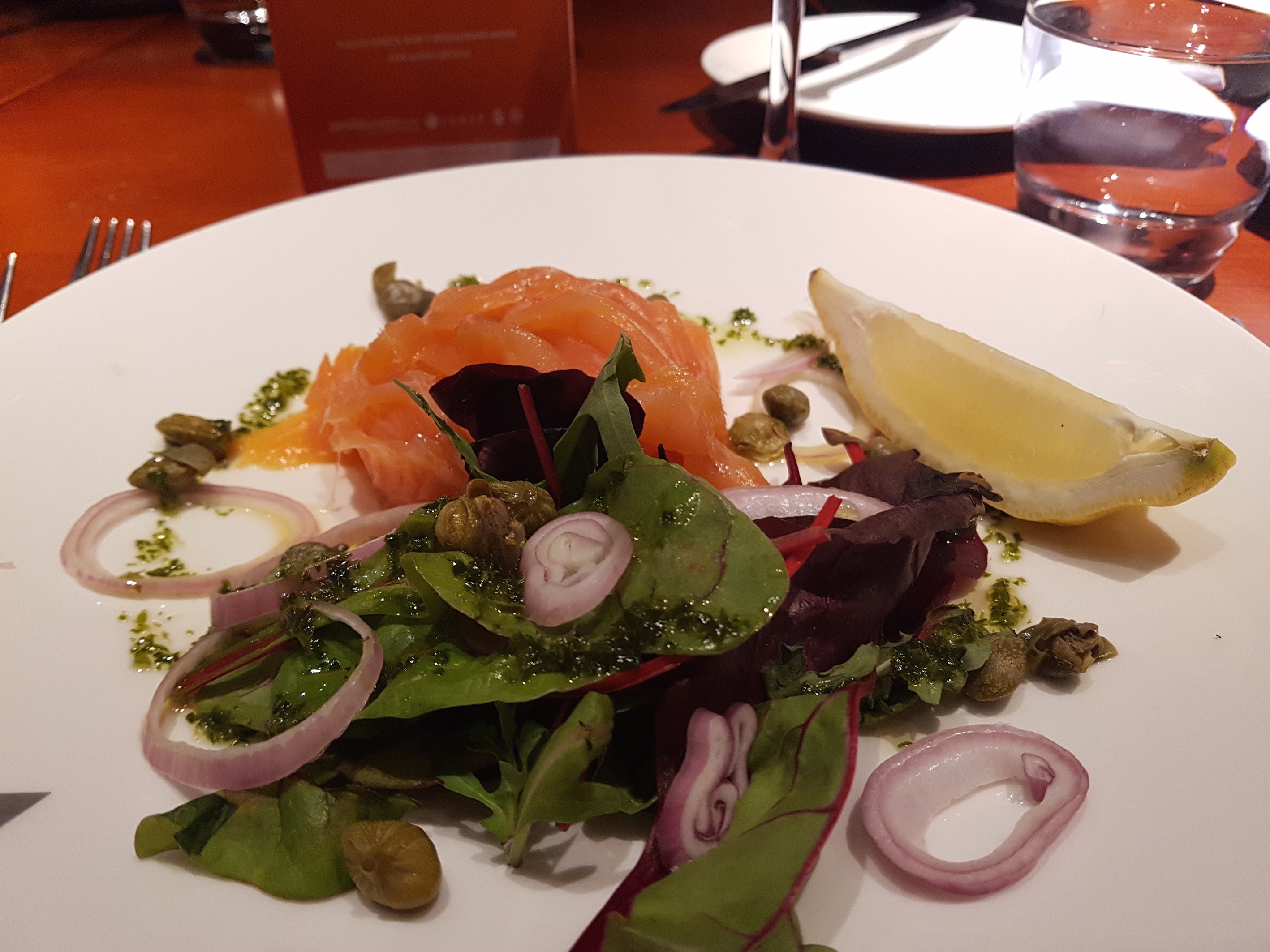 Steak. Always steak. I would love to tell you that I went for something different to my usual order so that I’d have an interesting story for this course, but no. If there is steak, 9 out of 10 times I’ll take the steak; and I’ll have it rare, please. This does mean that I have a reasonable reference for how a steak should be served. So, how was the 8oz sirloin (served rare, with thick chips, onion rings and mushrooms on the side)? It was okay. 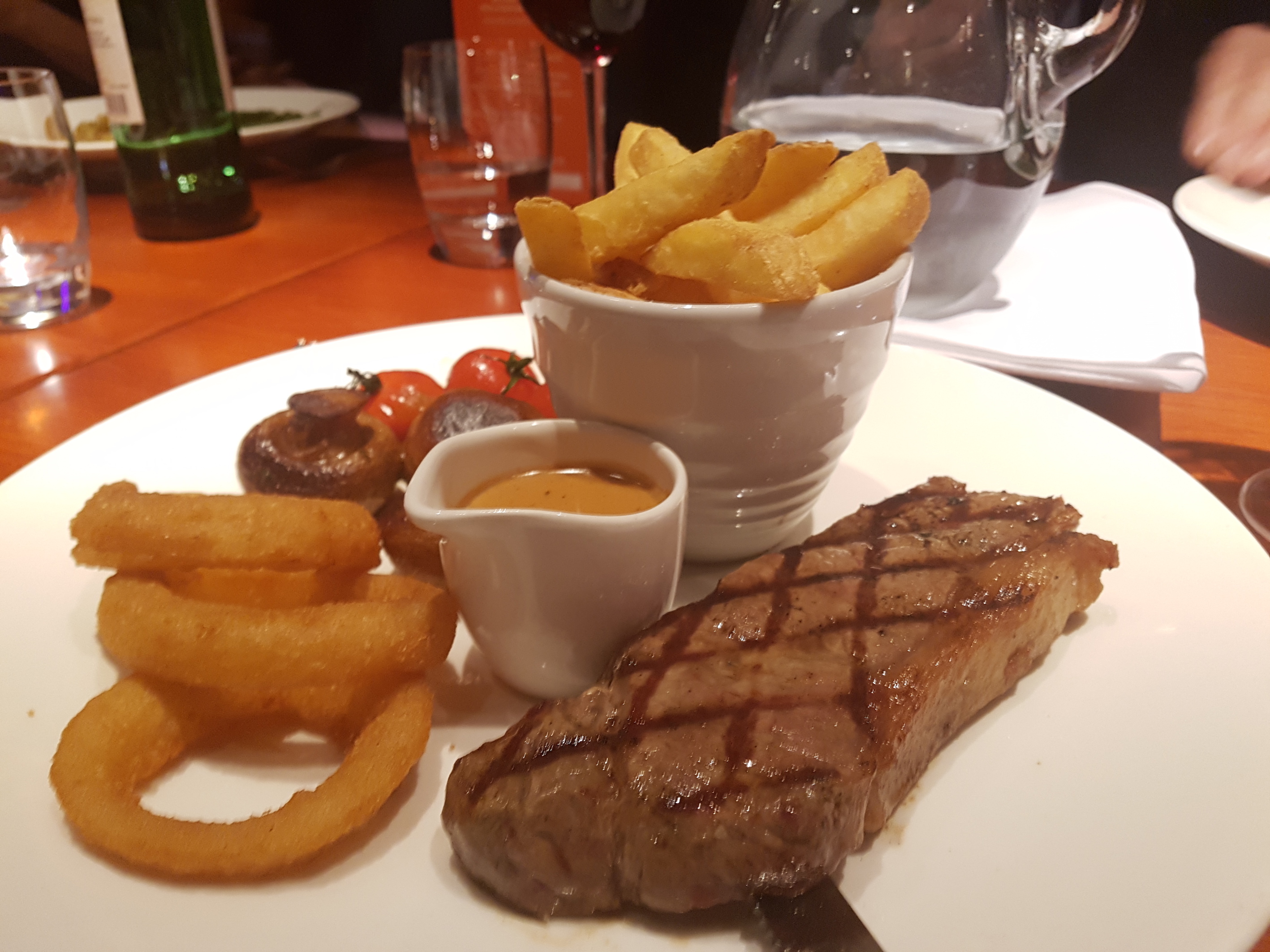 The meat was rare in the middle, but even by the standards of a sirloin was exceptionally chewy. Though the menu declares that each steak has been aged for 28 days, I found it slightly difficult to believe. With all of this said, the accompaniments were lovely, and that really helped. The chips were crisp on the outside and soft as a cloud in the middle, the onion rings didn’t have a trace of sogginess, the mushrooms’ flavour burst with each bite through their flesh.

Overall, it was a good main, I just wish I’d had sharper teeth.

Finally, dessert. I could write a love song about dessert with ease, I might actually have done that in the past… would I do that with the desserts at Curve? No, I might write a sonnet or more likely, a limerick. 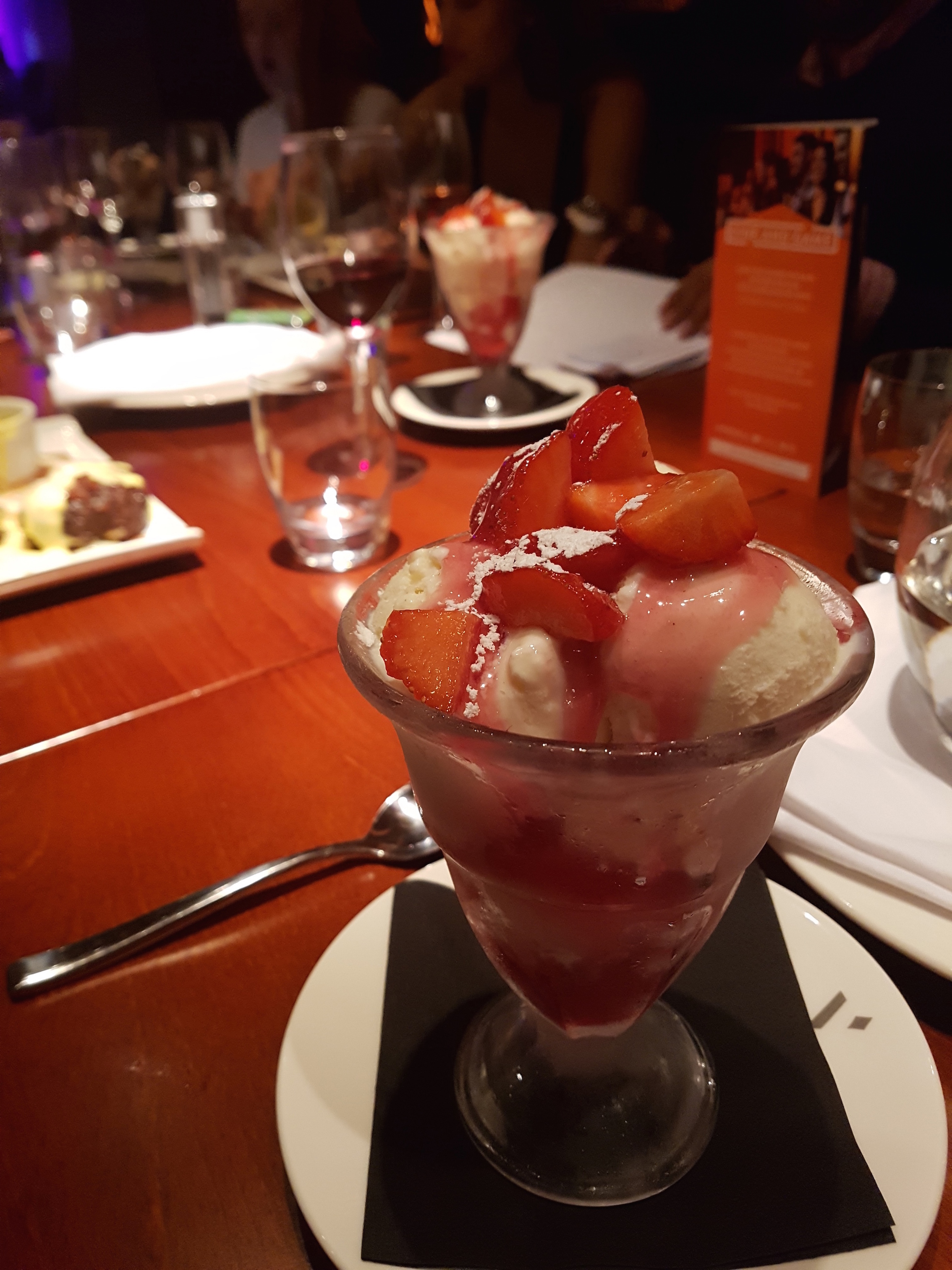 A strawberry and raspberry sundae should be an easy enough affair. The ice cream was alright, it held together on its own and didn’t disappear into a puddle within moments of being served. The strawberries were freshly cut and carefully distributed, and the raspberries were nowhere to be found. Honestly, that was disappointing. It wouldn’t have been hard to find some raspberries, or some raspberry sauce, would it? With that said, the bits of the sundae that were there were nice enough, and the rest of the dessert menu came out looking wonderful. Each of the dishes were simple things, like chocolate fudge sundaes, bakes sponge puddings and white chocolate and raspberry cheesecakes. Keep it simple, keep it good, this is Yorkshire after all and quality will always trump culinary showmanship.

Before exiting, we were treated to a spot of gaming, a quick spin on a roulette wheel and a try at some touchscreen slot machines (that I still don’t understand how to use). The staff littered throughout the gaming areas are warm and friendly, they’ll explain how to play without influencing the moves you make. At roulette the croupiers will help you understand the rules and payoffs, they won’t help you win, but by the end, you’ll have learned something if nothing else.

Having been given a free £5 bet, I walked away with a tenner in my pocket. It may not be much of a profit, but I’m happy with that, and it’s always better to walk away slightly up rather than holding out and losing it all.

Though it seems wrong to end a review this way, please remember that this is a casino, and if you are going to gamble, remember to do so responsibly.