So you may remember our first review of Tattu, praising them from head to toe for the overall atmosphere and food. Nearly a year on, we're back to take a peak at their winter menu.

So, I’m going to start this review with a little disclaimer. No, I do not work for Tattu, nor have I been slipped a little brown envelope full of £50 notes. With that out there, I’ll also explain its now 11:20pm and I’m writing this having just got home from Tattu because it is, in my personal opinion, THE best place in town. Its a very subjective view I understand, plus I know it doesn’t have the fanfare of a Michelin star like Man Behind The Curtain…. 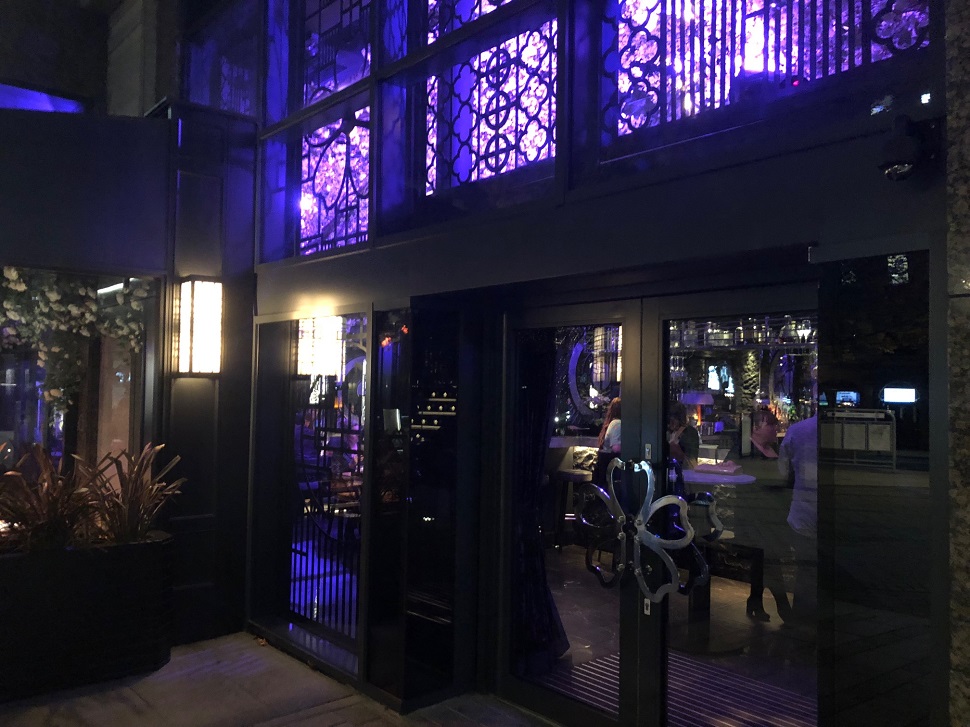 Now being a dab hand at knowing where the front door is rather than waiving in vain at a window, my dining partner and I rocked up a good 25 minutes early to a very full restaurant, even for a Thursday this was full…. a good sign. No problems with that, we we’re swiftly ushered to the bar to peruse the drinks menu. I wasn’t driving so went with the old classic Skull Candy…. again. These are like my kryptonite, I just cant say no. My dining partner who was driving was offered the list of Mocktails, or if there was nothing there that took her fancy, just to let them know and they’ll rustle something up that does. Great service, they’re on to a winner before we’ve even sat down. She went with one from the menu, Sweet Skulduggery, but its nice to know she had options.

From the bar we were taken upstairs to be seated effectively in the canopy. A great “people watching” spot is how my dining partner described it. There was an atmosphere, I noted last time I visited that the deep techno might have been a bit too loud and a bit to harsh for the clientele who were there. This time however, it was the same uber cool soundtrack just turned down to 7 rather than 26 and it was all the better for it, you found yourself nodding to the beats without having to sign language to the person 3 feet away.

Tattu launched their winter menu on the 1st October and Luther our waiter was more than helpful and knowledgeable about what to try, and just as importantly, what might not be something I’d like after I’d given him my brief and asked for recommendations. The new menu included dishes such at Spicy Iberico Pork Wonton, Wild Mushroom Spring Rolls, King Oyster Mushroom Hot Pot and Sticky Red Prawns. For Starters we decided on the above mentioned Wontons, Wagyu Dumplings and the Beef and Fois Gras Gyoza

The Gyoza we’re light and flavourful with their teriyaki and soy glaze and the Wagyu dumplings, which we’d been told to eat last due to them having a Sriracha sauce topping we’re exactly as they’d been explained, punchy flavour with a nice kick at the end. However the showstoppers were the Wonton’s 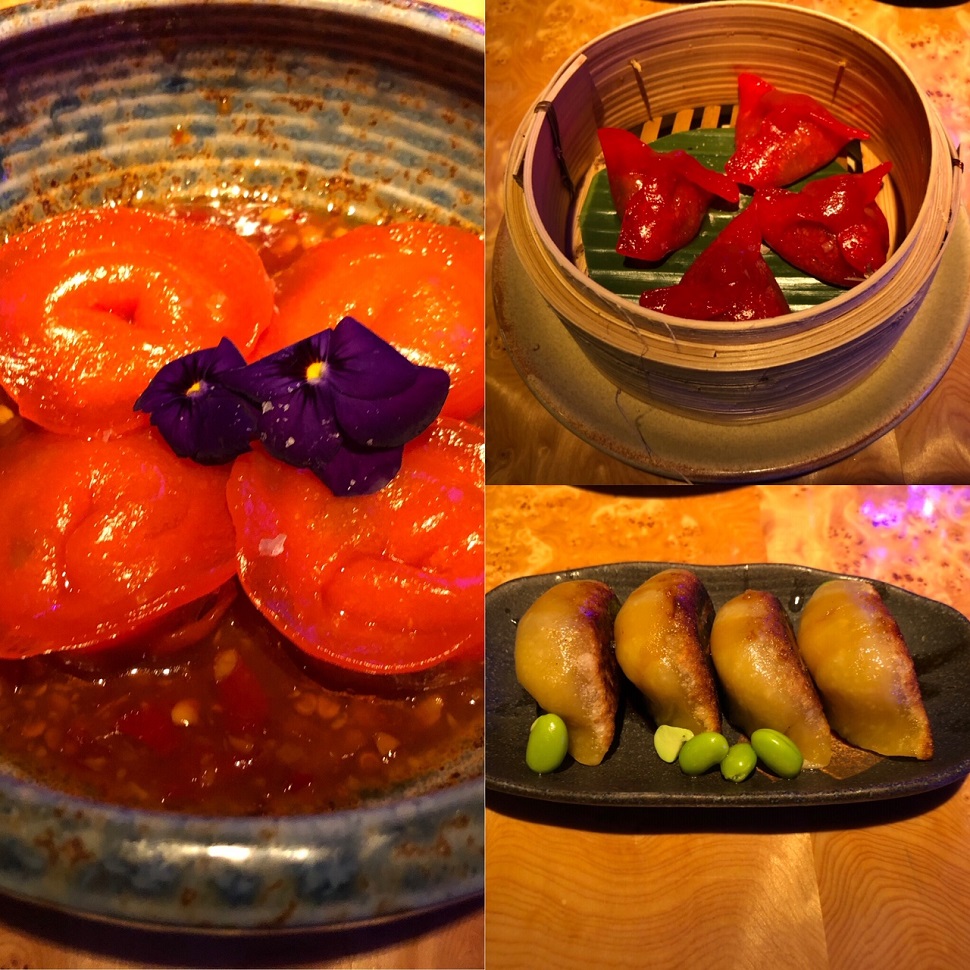 I can, hand on heart say they are my favourite starter ever, of any food in the history of man. It was soft, steamed Wonton bleached with beetroot filled with shredded pork, sat on the most amazing szechuan and peanut sauce. It was just so “moreish”. I’d eaten the starter with chopsticks but ended up asking for a fork so I could polish off the rest of the sauce!

With the starters plates basically sent back clean, our cutlery was replaced and Luther informed me that my request for a dish from the lunch menu to be served as an evening meal had been okayed by the chef. Another nice touch and something I very happy with

Now I’m all for trying new dishes, however my favourite Chinese dish is crispy fried shredded beef in chilli which was on the menu. Its not a new dish, but as I’d never had the Tattu version, it was new to me….. (loose link I know) 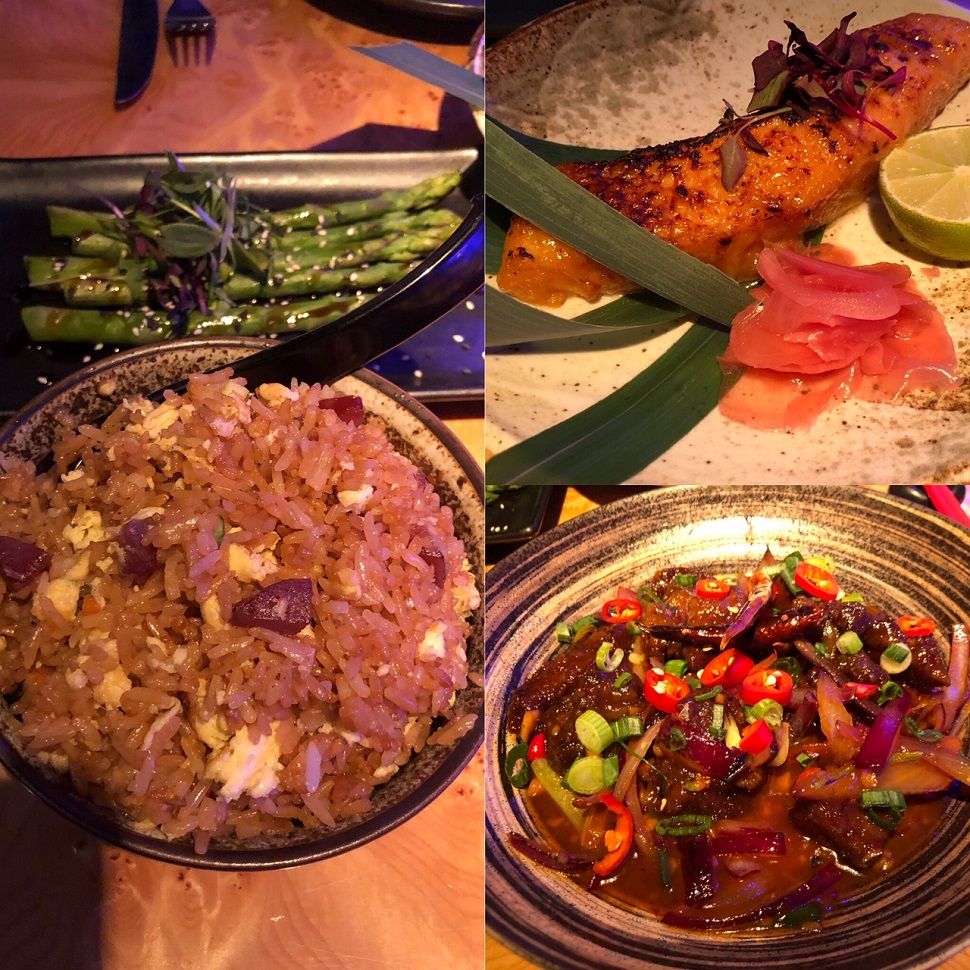 Our main arrived, I’d ordered the Chilli Beef accompanied by Duck Egg and Chinese Sausage Rice, while my partner opted for a new menu dish of White Miso Salmon with a side of Sweet Soy Grilled Asparagus. I’m reliably informed the salmon was beautiful. A thick slice of chunky fish, delicately spiced with almost a sweet flavour. The asparagus were gone within around 5 minutes so I assume they hit the right note too!

My Beef with Chilli dish was gorgeous, excellent cuts of beef with a tangy, garlic and spicy flavour. I’d removed the main chillies from the top after being told its not advised to eat them. I like hot food but if the venue is saying don’t eat them, It’s probably best to heed their advice. The rice was a good side option, very thick, it could almost be a meal in itself with the sausage having a real “gamey” taste. Not sure what it was but if you’re a fan of meaty flavours, then you’ve got to try that!

As we drew ever closer to finishing our meals and the inevitable happy food coma to follow, the table next to us had ordered desserts and one did take my eye, but when it came down to it we just couldn’t fit anymore in. We were full, not too full but a very content full.

I started this review with quite a strong statement. We’ve never had it so good in Leeds for new venues, flavours, ideas, techniques and cultures. There’s a spot for everyone and there are so many very, very good restaurants out there. However sometimes places just grab you, we all have our favourites and go to places. I cant say I’ve been to Tattu  a lot, because In all honesty I’ve only been a handful times.

However every time I go, I leave having thoroughly enjoyed everything about the night, from the service to the setting and the food. I’ve never been and it not be a 10/10, so, in my humble opinion, to me this is THE best place in town.