My visit to Harewood House during the long weekend was a triumphant spectacle of all things British – smoked meat, menu indecisiveness, and polite queuing.

From hog roasts to rainbow-coloured cupcakes, during May 26-28 the grounds at Harewood House were transformed into a celebration of all things food.

I attended on the gloriously sunny Saturday and came to the conclusion that anyone whose hobbies involve eating and drinking is sure to enjoy a day out at the Great British Food Festival. The turnout was impressive, with plenty of families, friends, and dogs in attendance to take advantage of the brilliant weather and even more brilliant food on offer.

What is the Great British Food Festival?

Held up and down the country, the Great British Food Festival takes place throughout the summer, usually based on the grounds of castles and manor houses – this year, Leeds’ local event was at Harewood Hall.

The festival features a spectrum of events and entertainment, including live music, chef demos, competitions, and talks, as well as, of course, food. At Harewood House there were around 100 traders, including street food vendors, ice cream vans, bakery stalls, and local businesses offering samples of everything from olives to gin.

You must purchase a ticket to enter (Harewood House was about £13.00) and from there, the venue’s your oyster (though I didn’t see any oysters for sale this weekend).

The options (were endless) 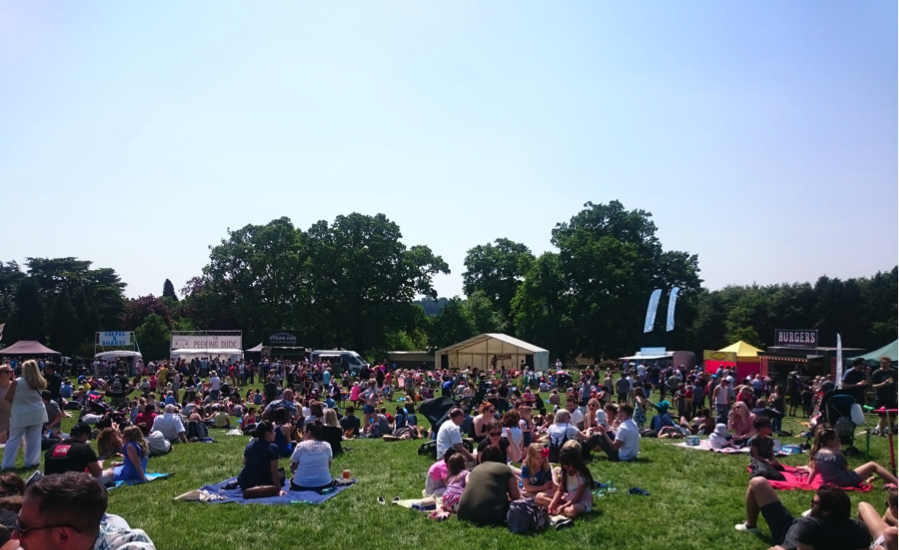 As food and drink definitely do fall into my top hobbies, I was initially overwhelmed by the sheer possibilities that lay before us upon entry into the beautiful grounds of Harewood House (for which, I should say, free event parking was definitely a highlight).

We had an initial wander around to scout out the possibilities. From Indian to Thai, Greek to Mexican, with an admirable turnout of home-grown favourites (think pie, mash, sausages, burgers, roasts) the options were spectacular. 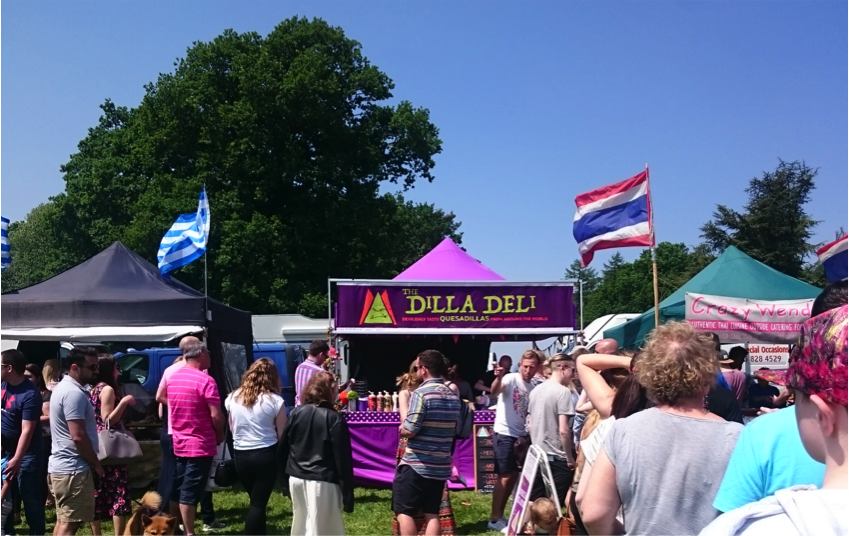 After much deliberation, I decided on a seemingly understated tent, which had a couple of Greek flags flying proudly above the longest queue in the park. I watched patient patrons happily walk away with massive pita bread wraps in hand and decided to join the ranks. 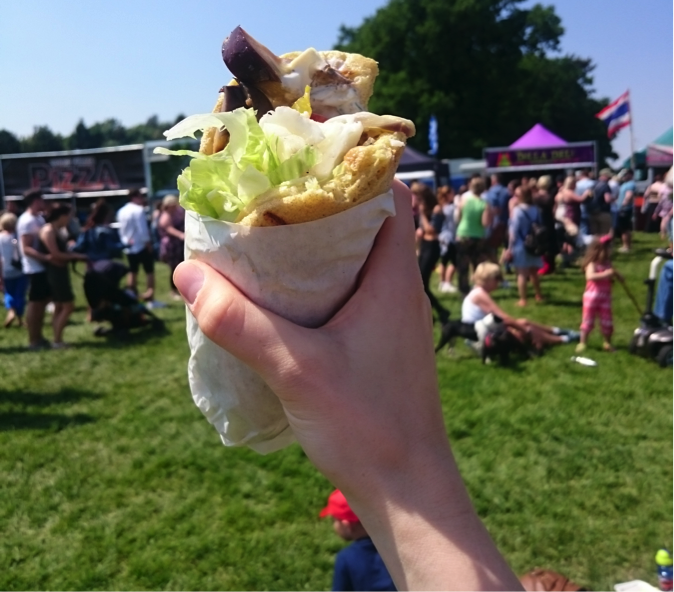 50 minutes later and I was rewarded with a delicious corn pita bread, stuffed generously with roast vegetables, halloumi, and tsaziki. The highlight was the thick, doughy pita, which made the wrap stand out from similar things I’ve had before. 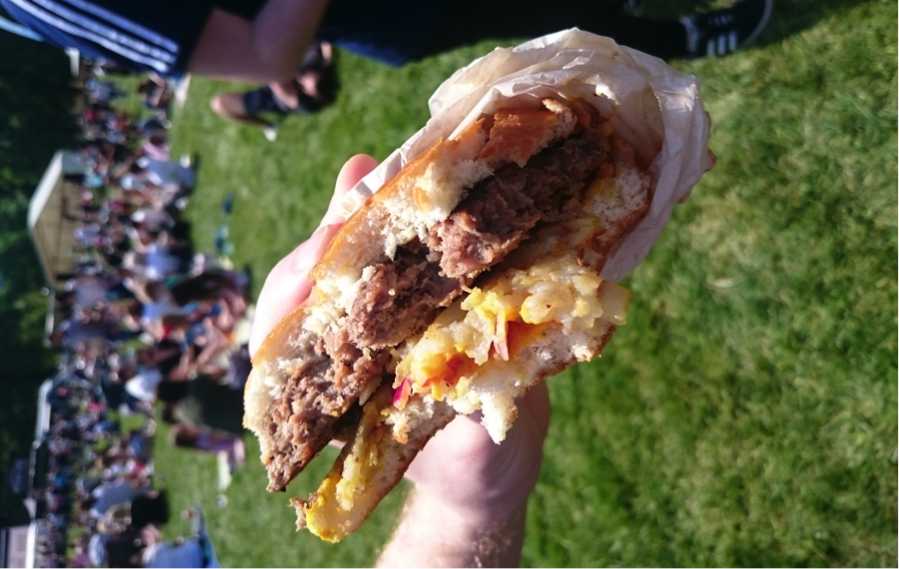 My companions were in the mood for burgers, and so intuitively wandered over to the tent marked ‘BURGERS’. One of them polished his off before I could snag a picture, which can only be seen as a testament to the deliciousness. Made with local beef and a cheeky hashbrown stacked inside, I’m told it was juicy and satisfying, just the sort of thing you want to tuck into while strolling around a gorgeous field on a sunny day. 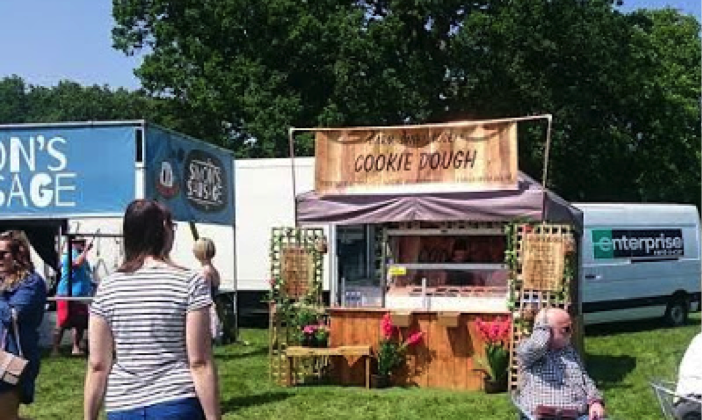 The number of sweet options on offer almost matched the savoury selection. From hot cookie dough to fresh crepes, we had some tough decisions to make. 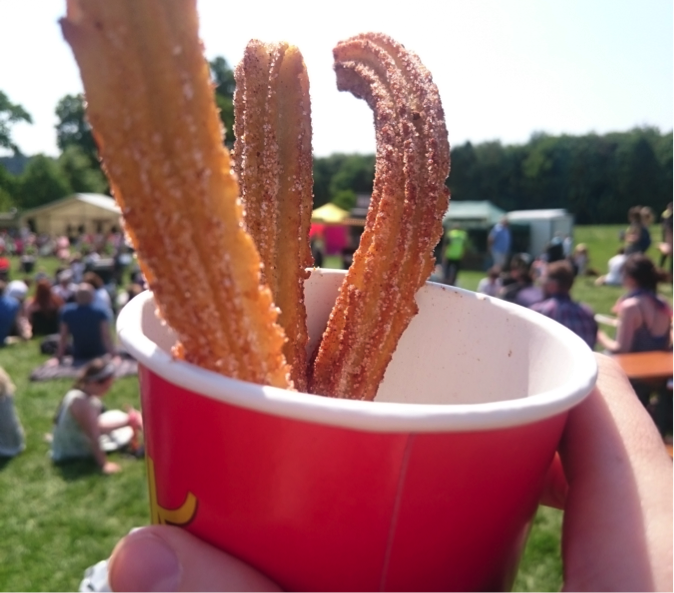 We settled on churros coated in cinnamon sugar and dipped in melted chocolate, which was the perfect crispy-sweet way to follow up our main meals. The danger: churros are easily portable, and so we ended up wandering into the market vendor tents, which were full of smaller stalls with plenty of treats on offer.

In the end, my backpack was full of caramel shortbread and brownies. However, the highlight was the tent stacked high with slabs of fudge. While there were other delicious looking fudge stalls at the event, this one was by far the most impressive – and the best value.

We walked away with £10 worth of Mars, Malteser, Ferrero Rocher, and Biscoff deliciousness. I’ll probably gain 10lbs myself, but I can safely say it was the best money we spent all day.

I’m going to be that annoying person and say I wish I’d seen more vegetarian options. The majority of the vendors were meat-based (burgers, chicken, steak sandwiches, roasts) and while most of the international stalls had at least one veggie option (and sometimes a vegan option), it was very much a meat-lovers market. 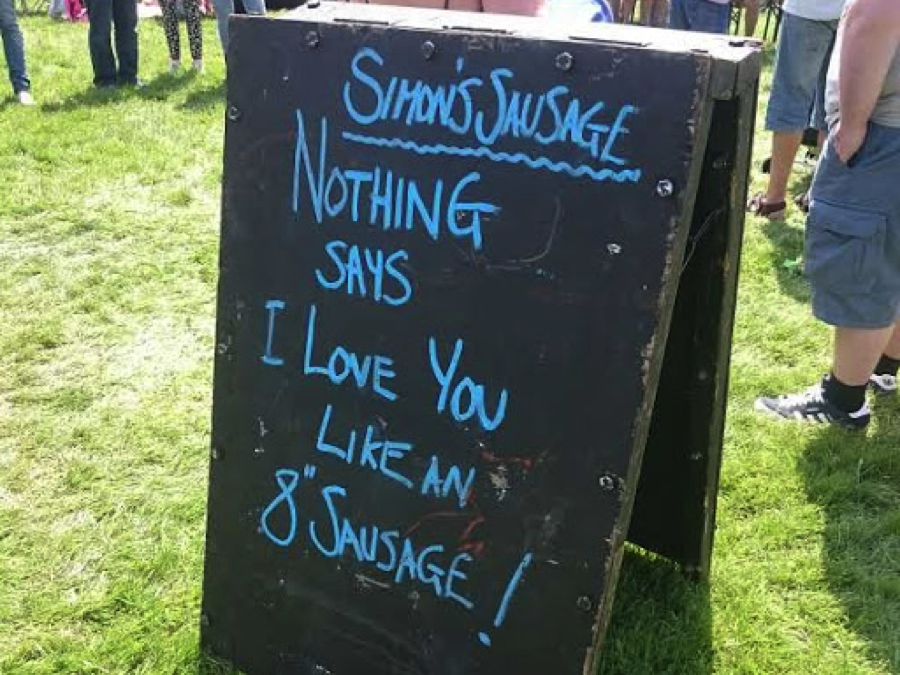 While my pita wrap was certainly tasty, I’m not sure that I could say it was worth the almost hour-long wait (or the £7 price tag). To be fair, the Greek stall was probably a popular choice primarily because of the quality of the chicken, lamb, and beef options, and that’s why the queue was so long – but it was also one of the only choices I had as a non-meat eater.

Better advertising might also have benefitted some of the vendors. For many of them, it was difficult to see exactly what they had on offer (and what prices they were charging). However, that didn’t seem to phase people as the longest queues were often at the smallest stalls. But perhaps they would’ve drawn even more of a crowd if they’d had better positioning of their menus. 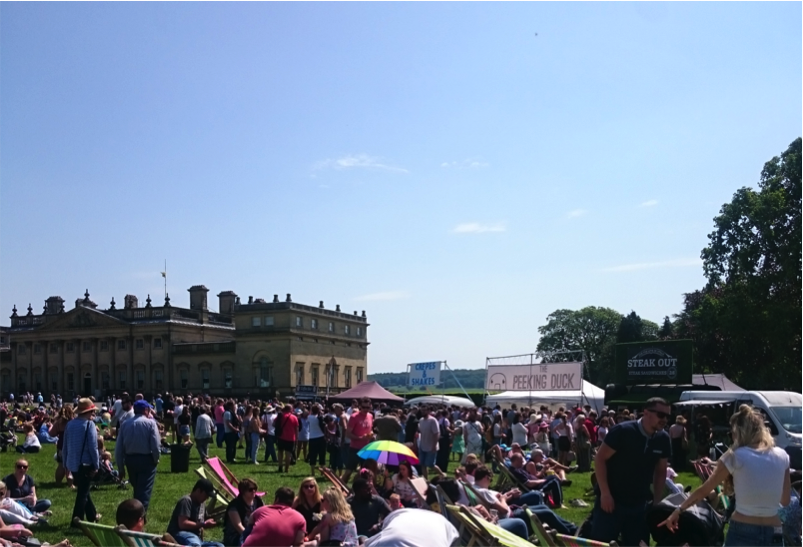 Overall, it was a wonderful day out, and not only because of the perfect sunshine. It was clear to see that there was something on offer for everyone. Families were enjoying the kid-centric rides and play areas. Foodies were flocking to the talks and demos. Sunbathers were lounging out in front of the live music.

And everyone had at least one delicious snack or drink in hand (and often one of each in both).