Wagamama has revamped their menu for summer, and set on the balcony floor of the White Rose Centre, we were lucky enough to try some of it out! Here's what we thought.

The new summer menu at Wagamama is here! And how do we feel about it? We feel great! Japanese food is a wonderful choice throughout summer because the clean cut flavours are always bright and filling without being heavy or (even worse) stodgy.

Our group of press and bloggers ordered across the complete menu, and overall the conclusions were the same. It’s a great summer dish. There’s not that much else to say.

As opposed to a starter-main-dessert setup, Wagamama opts for a mains-sides approach, and food comes as and when it’s ready rather than in a set order. This is both wonderful, and awkward. No matter how many times I’m told to ‘just eat yours when it’s arrived’ and how many times I say it in return, it still feels wrong to eat when your companions are just sat watching you.

For our side (or starter if you want to view it that way, but this came out second) we opted for the Beef Tataki. This is marinated steam which has been lightly seared and then served chilled and thinly sliced. For those who haven’t tried this before, you’re likely to love it if you like your steak rare or adore prosciutto. Equally, if raw meat freaks you out, then this won’t be the dish for you. 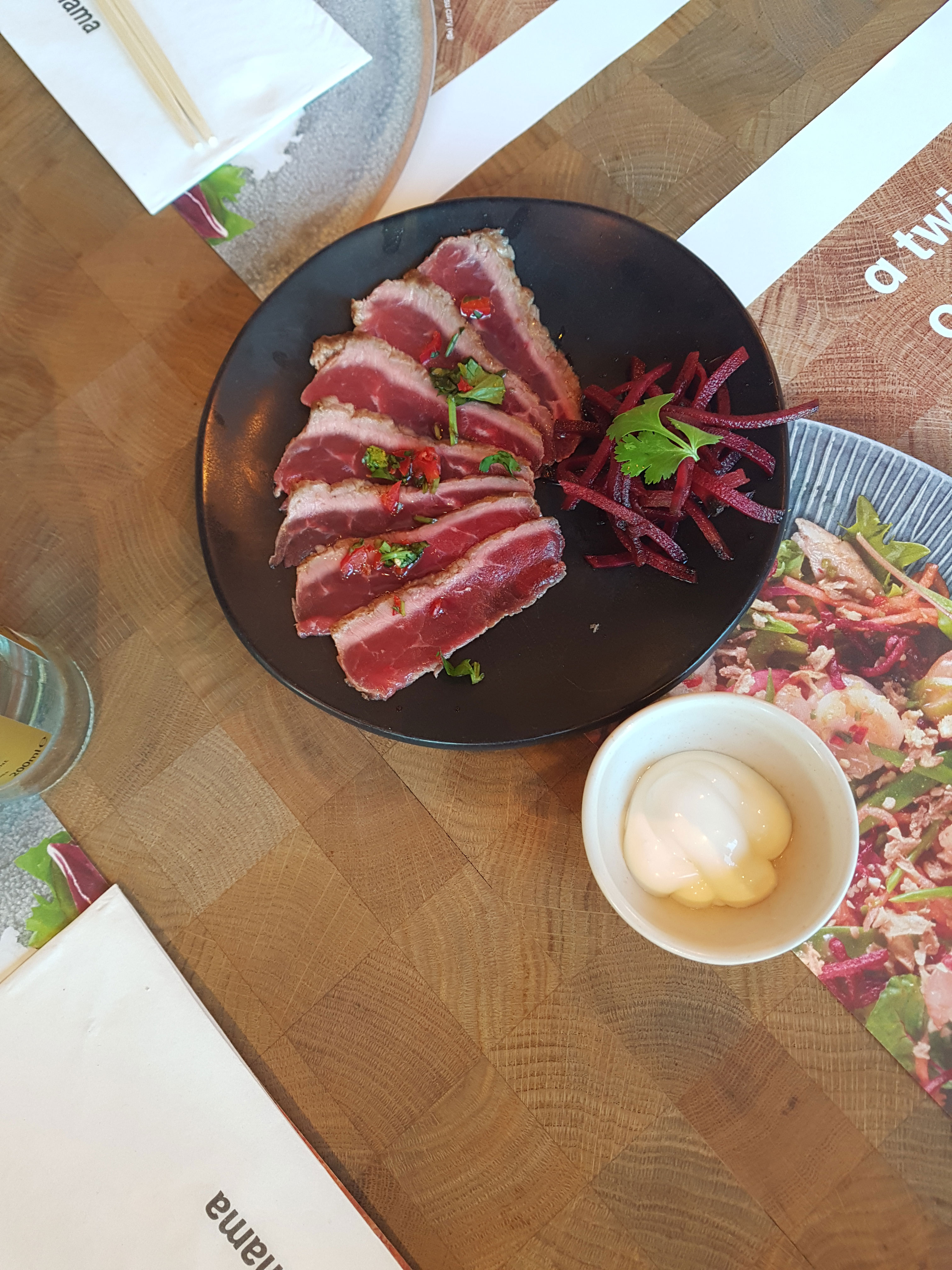 The colours were faultless, the stark contrast between the searing and the raw meat standing out like nothing else really can. The marbling ran gently through the cut of meat, and vibrant chillis and beetroot alongside the plate drew the eye without ever stealing focus. The flavours were subtle, if you weren’t focused on your food and appreciating its nuances then they could easily be missed. The citrus ponzu was nice, but nice is all I can really say about that one, because it didn’t contrast to the meat in any discernible way. This is most likely closer to how beef tataki is supposed to be served, but when it comes down to it, I’d rather have the (potentially) over-seasoned version that Yo Sushi serve.

Here, we opted for Grilled Duck Ramen and the Seared Nuoc Cham Tuna, and despite being close to one another on the menu these dishes were as different as you could possibly imagine.

The duck ramen bowl was intimidating, piled high with soft noodles and then generous portions of duck, pea shoots, spring onions and coriander. Despite being ravenous, this bowl went unfinished, the warming noodles and broth quickly filling us up. The broth was a wonder to behold, never too rich, or too salty, just more-ish.

The tuna was wonderful, but the total opposite. It was clean, with each flavour battling for first place on your palate. The final winner is hard to define, the sweet potato, the kale, the red onion, the peppers… They all had the chance to shine through on their own, and then collectively. 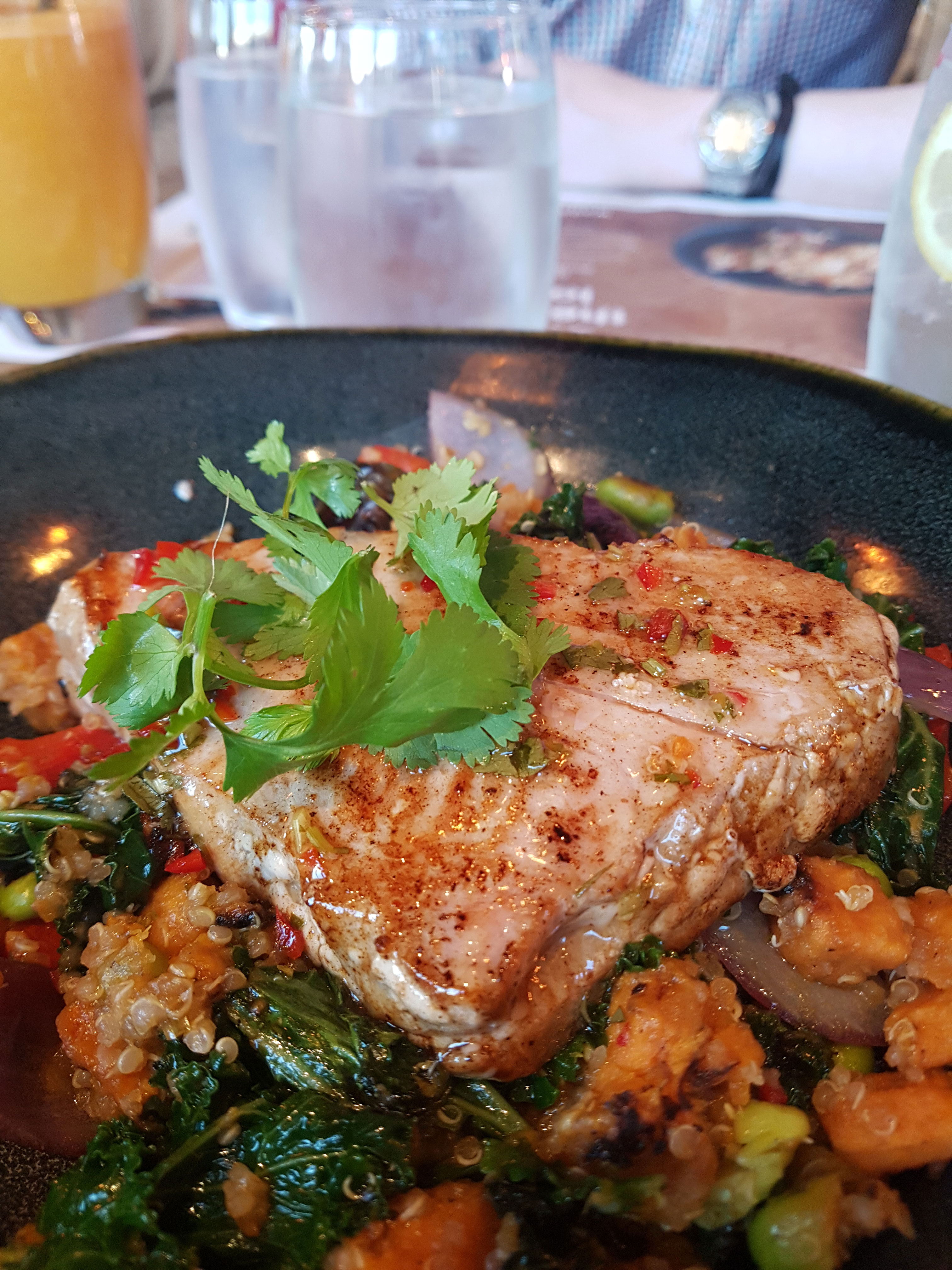 The only thing negative that I’d have to say about this dish is that it didn’t scream ‘Wagamama’ or ‘Japan’ at me. It was the kind of hot dish I’d expect to find at my favourite vegetarian spots (tuna not included) of indiscriminate ethnic inspiration. Do I wish I’d had something else? No, not really, I’m just having a hard time figuring out why I loved it in the first place. The ingredients were great, so was the presentation, and the flavour… well, I’ve already gone on about that. This just didn’t feel like the kind of dish that belonged in Wagamama. Oh well.

Wagamama is something of a guilty pleasure of mine. When honestly assessed, I think it’s sometimes overpriced, but that doesn’t mean it’s wrong to indulge there from time to time. Indulging in something that you don’t often make at home (such as ramen or fried squid) is a big part of the adventurous food culture we live in today and I’ll always celebrate that, but I’m just not convinced Wagamama should be a repeated all that often. Ultimately, there’s better Japanese food out there, especially in Leeds.